This is a classic American story of hard work and earned success – of immigrants’ struggle to find independence in America. It involves two men who never met but shared the same dream.


Their paths started thousands of miles apart but would lead them to the same spot, the same career and a better life. One could say Luis Angulo and Abe Shahin were bound by a dying craft. Their fathers were cobblers. They handed down the art to sons who wanted nothing more than to carry on that tradition. A tragic turn of events would bring Angulo into the Shahins’ life. But his taking on Shahin’s store would be a blessing for both families.


It would be a long road filled with hard work, but the two men would keep the same shoe-repair shop in Tempe alive. For generations, immigrants such as Shahin and Angulo have understood that a better life for their families is worth sweating for. Born generations apart, their childhoods were filled with time spent at their fathers’ sides, learning how to mend soles. Shahin’s father owned a small cobbler shop in Bethlehem, Israel.


Angulo’s father owned several shoe shops in El Salvador and Honduras. They dreamed of following in their father’s footsteps and owning shoe-repair stores of their own. But in war-torn countries where fighting ends lives, dreams often are cut short. Shahin was 16 when he left Bethlehem in the late 1960s. He traveled the world, globetrotting across Europe and the Middle East, but he fell in love with America. He landed in the Midwest in the mid-1970s and worked for a short time with a cousin. Yearning for his father’s craft, he joined his brother in Arizona in the late 1970s and opened his first shoe shop in Scottsdale. Knowing little about the red tape that comes with opening a business, Shahin struggled. He had to sell his first business. In 1981, he was back in Bethlehem visiting family when he finally found something he loved more than the shoe business. A beautiful 20-year-old Palestinian woman named Samira stole Shahin’s heart.


“We met and two weeks later we got married,” Samira said. “It was beautiful, wonderful.” 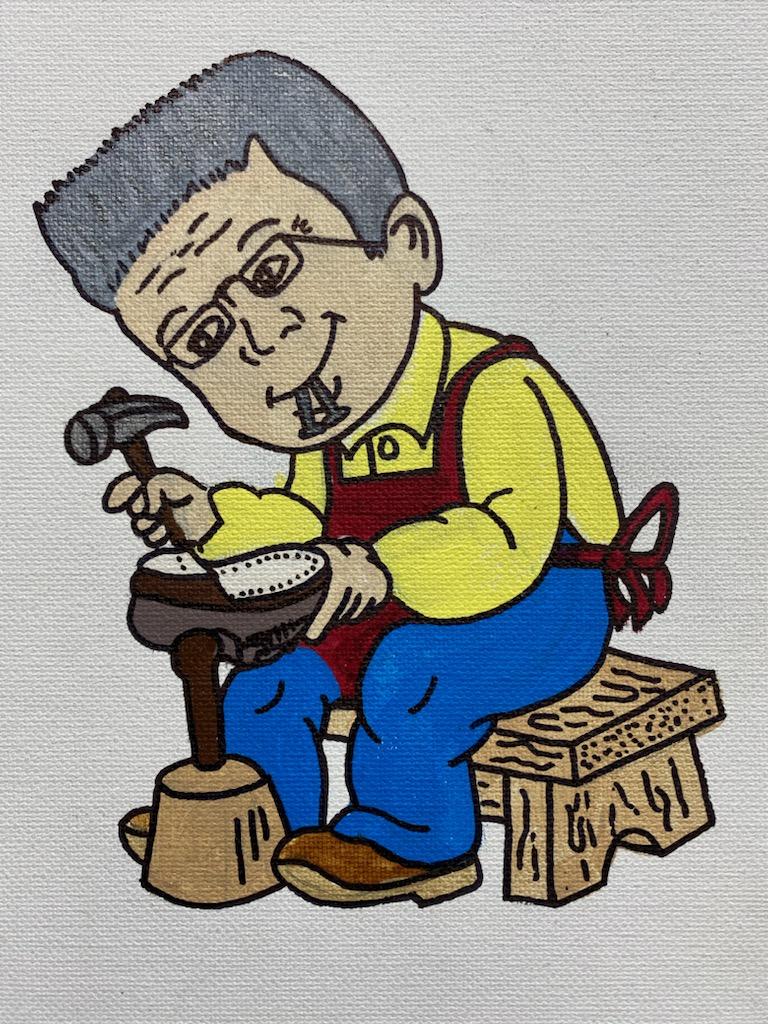 She encouraged her new husband to follow his dream and open another shoe shop. This time in Tempe. In 1989, Shahin opened Abe’s Shoe Repair shop on the southeastern corner of Guadalupe Road and McClintock Drive. The store was barely 500 square feet, but it was Shahin’s palace. For nearly 20 years, he made miracles with shoes that had seen their last day until they landed in the hands of the craftsman. He had everything he had ever wanted. The shoe man with a thick accent who boasted of his four children and beautiful wife earned a loyal and loving customer base.


We had the perfect life, Samira said.”My husband always said, ‘I’m the luckiest man. I have everything,’ ” she said. “For 27 years, he didn’t leave this country. He was living his dream. He loved America. He loved Arizona. He loved Tempe.” Escaping El Salvador The same year Shahin opened his business, a 20-year-old man was escaping what war had done to his country. Even more, he was escaping a life in El Salvador without opportunity. “Honestly, I came here illegally,” said Angulo. He spent one month in a detention center. He was luckier than most immigrants are today. Nowadays, laws that limit immigration from many countries make it nearly impossible for immigrants across the world to earn U.S. work permits or citizenship.


During the late 1980s, America accepted some El Salvadorians through asylum. The youngest of eight children, Angulo used a work permit to move to California, where he joined his surviving brothers and mother. His father was dead and three brothers died as children because war prevented accessible medical care, Angulo explained. His father had owned three shoe shops in El Salvador and one in Honduras. He lost all but one of those businesses in the war.


But in America, Angulo planned to carry on his father’s legacy. He worked long days at several shoe-repair shops, and at night he would take an hourlong bus ride to a community center that taught free classes on English as a second language. In 1998, a Phoenix shoe-repair-store owner lured him to join his crew. 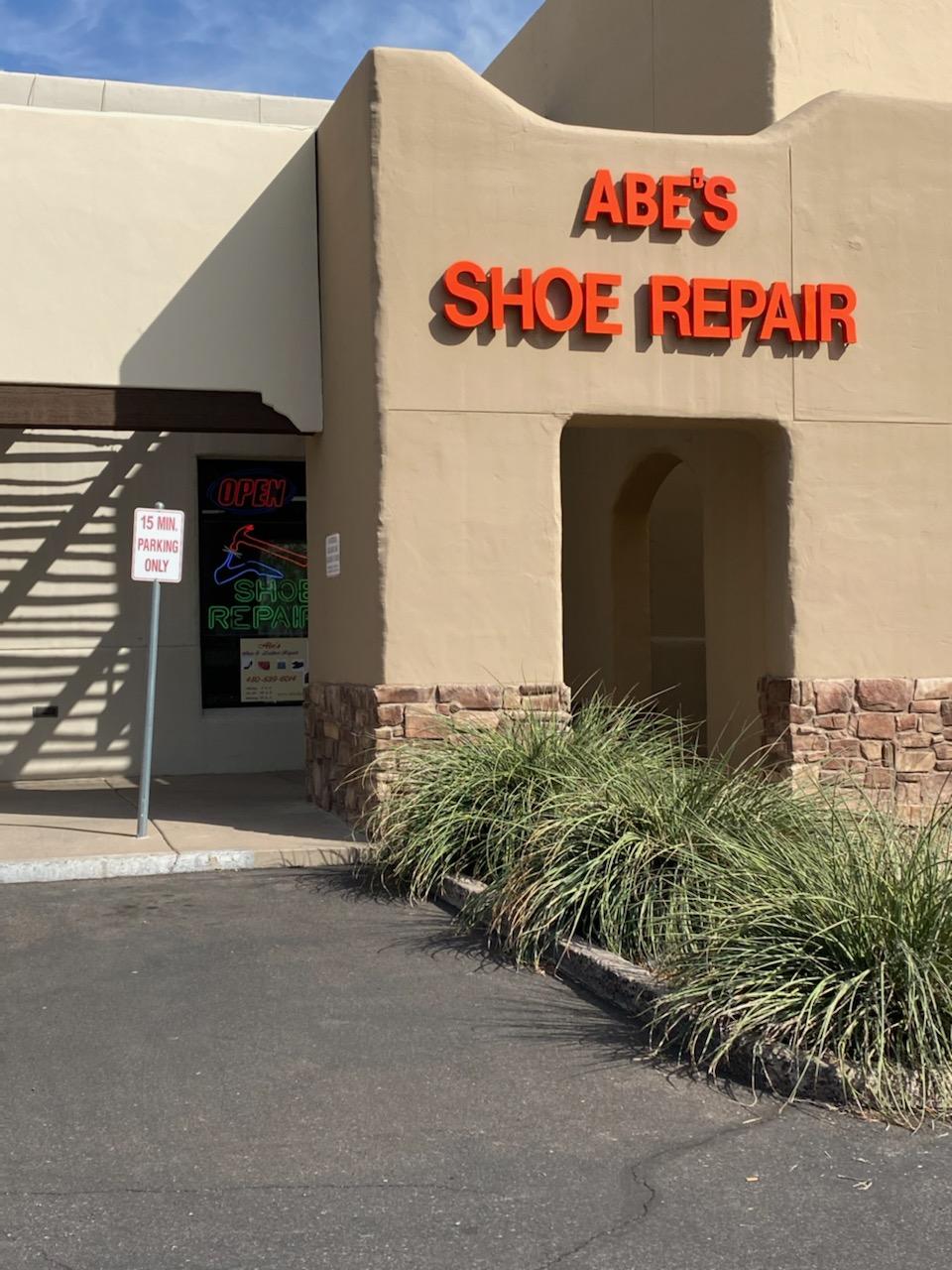 On October 1, 2008, complications from a minor surgery would claim the life of 59-year-old Abe Shahin. While Samira mourned her husband, she also was focused on his life’s work. “I didn’t know what I was going to do,” she said. “This business meant everything to him. I didn’t want to sell it.”


As the Shahin family struggled, Angulo’s 40th birthday was looming, and he was determined to start his business. An acquaintance told him about Abe’s Shoe Repair. Angulo called Samira, and the two planned to meet at the store. The store was everything Angulo wanted. And Samira knew she’d found the right person to carry on her husband’s work. “I knew right away he was a good man,” Samira said. “He knew about shoes like Abe did. I was so happy.”
Samira wanted Angulo to meet her eldest son Gabriel, a 24-year-old bank branch manager. Gabriel felt like he knew Angulo. He was honest like my dad,” he said. “My mom and I knew . . . he would keep my dad’s business running. My dad would be proud. We even lowered the price for Luis.”


Gabriel even helped Angulo get his business license and to do his taxes. To show his gratitude, Angulo told the Shahin family he wanted to keep the business name in honor of Abe. A photo of Abe Shahin mending shoes hangs on the wall of the shop. Samira considers Luis a godsend and wonders if her husband had a hand in helping answer her prayers. “When I had a problem, my husband would always say, ‘Don’t worry, everything will be fine. Everything will be fine,’ ” she said. “Maybe even in his death, he sent me an angel to give me Luis to take of the store.” 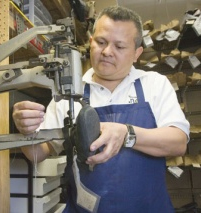